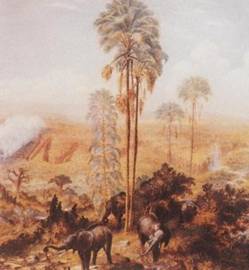 23. 1 Ichneumon taenianotus,2561 Boschbock257 [sic], 1 red-buck,258 1 birds. I was so intent on the bucks that the fall of darkness took me surprise, I lost the path and so entangled myself in the thickets that I sure that I should have to pass the night in the woods. I shot 6 alarm-shots. I was glad to hear them answered by regular salvos from the village. Flayed the boschbock and left the carcase in the wood.

27. On horseback with Parker259 and Delegorgue to Umgeni.

29, 30. Continued the trip and arrived at Umkamas in the morning. country beautiful; the hills rounded, and covered with grass at their summits; close thickets in the valleys. We passed several rivers; Kaffer kraals. My comrades at a loss; arguing. Hunted hippopotamus; in vain. 1 white-headed eagle,262 . 1 Anas,263 F. 1 Antelope M skeleton prepared. White-necked Carbo common.

31. Continued hunting hippopotamus; no luck. In the evening, accompanied only by one Hottentot Bastard we came sufficiently near to hippopotamus. Two bullets went whistling at the same moment, and found their mark in the head of a young sea-cow. She came to the surface several times, spouting blood high in the air. An adult now appeared; once again our shots sounded as one; it showed the whole of its body above water, dived, a strong furrow appeared in the water, moved rapidly towards the shore, and soon the whole body of the monster was visible above the surface, in form and attitude like a gigantic pig. With incredible swiftness it hurled itself once more into the stream, and rose several times in succession, each time spouting blood. Darkness fell; and we were forced to return.

1 September. We looked in vain for the hippopotamus. Gregory, I and a Hottentot Bastard, went off by boat upstream, to meet the waggon at a ford higher up. We had not gone far before we saw a herd of buffalo on one bank of the river, and while we were taking note of the direction in which they were moving, a troop of elephants — a magnificent beast, the elephant – appeared on the other bank, on a little hill where I had been only an hour and a half earlier. An old bull marched at the head of them with ears and trunk aloft. I landed on the side where we had seen the buffalo, and reached the ford and the waggon by following elephant-paths.

2. Saw numerous buffalo but was unable to get near them. Clouds of locusts darken the sky. We go further afield to a smaller stream.

3. Lying in wait for the buffalo. Hear them approaching at full gallop through the bushes. Climb an acacia. Give the first bull a bullet, which makes him fall back upon his hind-quarters. He gets to his legs again and escapes .Falco once again very common, as also Fa/co ecaudatus.