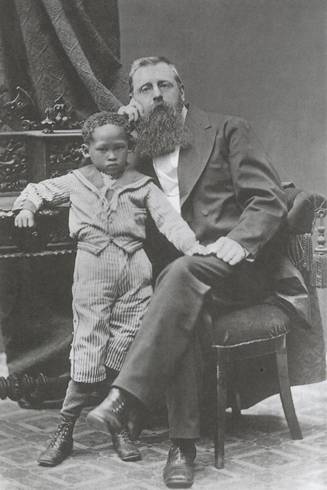 “The first inhabitants were people who were small in stature and from whom I would imagine the Bushmen descended. If they had really been the original inhabitants of these areas, they would at first have used weapons of stone. They drilled holes through the centres of flat round stones into which they inserted wooden handles. These were their clubs. In time they learnt probably from immigrating tribes, to work meteoric iron, which occurs here plentifully, into weapons. These weapons, especially the arrows they poisoned with the juice of the milk-bush [Eziphorbia sp.] mixed with the mush of a crushed larva that I think is a kind of butterfly larva. Only today I discovered a real poisonous milk-bush; it is a kind of succulent that grows on the mountain slopes, always in a cup-shaped form. The stems are star-shaped. in section and the protruding edges are densely covered with curved thorns. I am going to try to get some seeds of this succulent as I have not seen this kind in any hothouse at home. The Bushmen mix this poison in a piece of ostrich egg-shell and place the arrow-heads in it for some days. It is thought that the poison penetrates mainly into the sinews with which the iron heads off arrows are fastened to the shafts. This poison certainly works only very slowly and often it does not cause death if the arrow strikes in such a way that it can be cut out immediately; Proof of this was when in Ondonga I carelessly rammed such an arrow through my hand, but immediately squeezed out the blood very thoroughly; after which the wound healed without trouble.

The Bushmen are small, not black but only grey-brown as if they are heavily sunburnt. They have strongly developed instincts of the savage but are otherwise not very intelligent. They cannot count further than to ten and this only on their fingers. A Bushman who is in the service of Mr Bergvall in our company; that is, among the servants, cannot learn to count lack hair on the chin and body; One differentiates between wild and tame Bushmen. The wild ones are now found only in the Kalahari Desert, as far as I know. The tame ones are not very reliable because their wild nature often reveals itself. They run away and then become dangerous highwaymen because of their cunning, speed, and bloodthirstiness. Their language consists of a lot of smacking with the tongue against the palate. Three of these sounds occur in the Bergdamara and Namaqua languages. I assume that they got them from the Bushmen”